HomeHealthAllergic Rhinitis vs Sinusitis: Are They The Same?
Health

Allergic Rhinitis vs Sinusitis: Are They The Same?

Sneezing endlessly and having a runny nose can be irritating, especially during the current situation. For the past few years, most people have become more health-conscious. Even if you only have allergic rhinitis or sinusitis in Singapore, there is a high chance they will assume you are suffering from something worse.

Look back and think carefully about whether or not you or someone you know have ever been in a situation where everyone around steps far away from you or them because of a sudden sneeze (even if you or they are wearing a face mask)? That is the exact scenario that most people with allergic rhinitis and sinusitis have been experiencing since the outbreak.

Even though over 400 million people are suffering from allergic rhinitis and 28.9 million with sinusitis around the world, there are still many people who are not familiar with these conditions. In most cases, people then interchange with one another even if they are not the same.

If you are one of those people who use allergic rhinitis and sinusitis interchangeably, reading through this article will help you understand what they are, including the difference between these two conditions.

What Is Allergic Rhinitis?

Allergic rhinitis, also known as hay fever, is an allergic reaction of an irritated nose to tiny particles called allergens.

When a person inhales allergens through their nose or mouth, their body will respond by generating histamine, a natural molecule. That is when the reaction of allergic rhinitis will happen, but the cause of this condition varies.

Some people will sneeze endlessly after being around or breathe in dust mites, mould, animal dander, or pollen from plants. There are also other types of people who have allergies to rhinitis in Singapore but only sneeze whenever they consume a particular food or drug.

Despite all the sneezing, allergic rhinitis is not contagious. That means anyone around you is safe, but you still need to cover your mouth and nose when you suddenly sneeze.

If you are not sure what is the cause, consider getting a skin prick test to have a clear answer and solution for your allergic rhinitis. In this procedure, the doctor will place small samples of allergens on the forearms and see if there will be any reaction.

When To See A Doctor?

You can consult a doctor if you can relate in either one or all of the following:

If you have ticked one of these boxes, you need to see a doctor soon and get your allergic rhinitis in Singapore. Make sure to list down all of the medication you have taken so far and the things you did before you had any reaction. Doing so will help the doctor access your condition and make you feel better in no time.

Sinusitis is another common condition that refers to sinus infection. That means the sinuses have become inflamed. The cause of this condition is a viral infection and will get better within a week or two, but in extreme cases, sinuses without getting treatment in Singapore can go on for more than a year.

If you are not familiar with sinuses, they are air-filled cavities located behind the head, particularly in the cheekbone and forehead.

Nevertheless, sinusitis happens due to the fluid building up in the sinuses, which is where germs will grow if left untreated, and that causes sinus infections. And unlike allergic rhinitis, sinusitis can be contagious. If you have recently suffered from sinusitis, you can expect that your condition will be contagious for up to two weeks.

If none of these works, consider getting sinusitis treatment in Singapore. The help from a medical professional is way better than self-medication. If one who is suffering from sinusitis is a child, do not carefully give them any over the counter medicine and consult a  doctor first.

When To See A Doctor?

The preparation you need to do for sinusitis is the same as when you need to see a doctor for allergic rhinitis in Singapore. Besides listing down all the medications, ensure to let the doctor know when the symptoms start and become worse.

How to Distinguish Between Allergic Rhinitis and Sinusitis?

If you are still not sure which condition you are suffering from, take a look at this infographic. It has symptoms of allergic rhinitis and sinusitis. And once you have confirmed which one, make sure to consult a doctor for faster relief and better quality of life (no more sneezing). 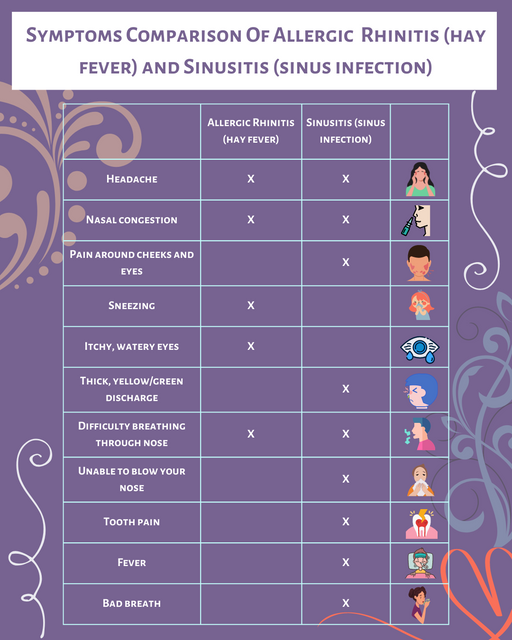 Relief From Allergic  Rhinitis and Sinusitis With Dr Jenica Yong!

Whether you or someone you know suffers from allergic rhinitis or sinusitis, they should get treatment. Even though these conditions are not life-threatening, sneezing non stop can disrupt the daily routine.

Think of it this way. Unremoved ear wax can cause ear infection in children leading to temporary hearing loss. The only way to prevent that is to get a checkup and undergo an ear wax removal in Singapore at least every six months.

Contact Dr Jenica Yong (65) 62353886 or leave a message on her ENT clinic’s website if you are any concerns or need treatment related to your ear, nose, or throat problems like allergic rhinitis or sinusitis.

Thanks for the support :

How to Gain a Satisfying Gambling Experience from a Casino Site

How to Use a CPAP Machine in Hot Temperatures?